Home > Films > Was My Father A Good Man?

Was My Father A Good Man? 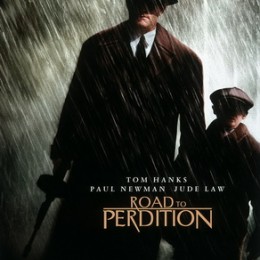 I spent winter back in the states, and I was visiting my sister and her family when my birthday hit. My brother-in-law, a film maker, spread a bunch of his DVDs out on the table. I was to pick a movie for the family to watch.

There’s often a familiar theme to the films I choose to watch. Often it’s a longing for a connection to Honor, to Father, to Hero, to Warrior.

One of the DVDs’ cover photo was a silhouette of a man in a hat and trench coat walking down a path, and boy walking at his side.

Road to Perdition was the title. I read the description to learn it would be full of violence. I look over at my two young nephews and my little niece. I don’t know that this is a “family movie.” But it’s the one I want to watch. I’ll let their parents decide if its OK for the kids.

The film begins, “There are many stories about Michael Sullivan. Some say he was a decent man. Others say there was no good in him at all. But I once spent 6 weeks on the road with him, in the winter of 1931. This is our story.”

The theme of father and son is strong, and I know I’ve chosen a film to feed my soul a bit. A film to spark insight and connection to my own troubled past with my father as a young man. He was accused by my mother of being far less than a good man, just as I was beginning to come of age.

The film ends with this quote:

“I saw then that my father’s only fear was that his son would follow the same road. And that was the last time I ever held a gun. People always thought I grew up on a farm. And I guess, in a way, I did. But I lived a lifetime before that, in those six weeks on the road in the winter of 1931. When people ask me if Michael Sullivan was a good man, or if there was just no good in him at all, I always give the same answer. I just tell them… he was my father.”

There’s deep medicine here. There’s a felt sense of honor in the son simply telling the story of his father–a story of his father doing what many would consider very immoral things to provide for his family, to avenge their deaths and to protect his son. There’s the observation that every son has a need on some level to have and hold honor for his father. Even if the rest of the world stands in judgment of him.

Of my all my siblings I was the only one who never cut my father out of his life. It meant risking the judgment and love of my siblings and my mother. But…

He was my father.

RONIN CHALLENGE: When’s the last time you told the story of your father without moral judgment? Maybe he was in many ways a bastard. But can you see him as a man. A man facing challenges and situations that you will never fully understand. Who do you share the stories of your father with? Can you hold him–and all his perceived short-comings–in a way of Honor? Can you let him be? Before he dies, not years after? Ronin, there is medicine here.